In February this year, five prisons in Hubei, Shandong and Zhejiang were infected by criminals, which attracted wide attention from the society. Among them, the epidemic situation in Rencheng Prison in Shandong caused 207 people to be diagnosed, and the then director of the Judicial Department was dismissed. The latest progress has been made today (4th): Wang Wenjie, deputy director of the provincial prison administration, Liu Baoshan, former warden of Rencheng Prison, Deng Tihe, former deputy warden, Chen Minhua, former instructor of the fifth prison area, and Dai Guanghui, driver, were tried on the same day and pleaded guilty and repented.

On February 21st, Shandong released a message saying that 207 people were infected in Rencheng Prison, including 200 prisoners and 7 policemen. The central investigation team found that the epidemic spread to prison police officers by people who arrived in Jining by car from Wuhan on January 21, and then caused some police officers and criminals to be infected. Among them, on the afternoon of February 12th, a police officer on duty was treated in isolation due to cough, and was diagnosed at 22 o’clock on the evening of 13th.

Governor Chang ‘an Street noticed that some details of the above facts were disclosed for the first time in today’s trial. When Dai Guanghui, the driver, was tried in rencheng district Court of Jining City, the prosecution said that on January 22nd, Meng Moumou, a returnee from Wuhan, visited Dai’s house and had contact with his family.

When Dai Guanghui came home, he put the things brought by Meng Moumou and others on the balcony. In short, he knows that the other party is from Wuhan. However, the truth was not revealed until the outbreak of Rencheng Prison.

After examination, Dai Guanghui’s serum antibody was positive, and one of his close contacts was also positive. Eventually, he was transferred to justice on suspicion of obstructing the prevention and treatment of infectious diseases.

As for the prison guard who visited the hospital on February 12 mentioned above, it was also disclosed in today’s court hearing. When Chen Minhua, the former instructor of the Fifth Prison District, was tried in rencheng district court, the prosecution alleged that he was forced to seek medical treatment by the unit on the same day, and was diagnosed after examination.

According to the prosecution, Chen Minhua actually had cough and other symptoms for a long time, but concealed his illness for a long time, so he should be investigated for criminal responsibility for the crime of obstructing the prevention and treatment of infectious diseases. 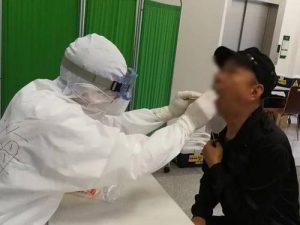