Saliva sample collection is a harmless and painless method to obtain DNA/RNA. This method will not cause any discomfort to the collected person, and it is easy to be accepted, so it can maximize the sampling range of genetic research. The saliva collector is mainly composed of a collecting funnel, a collecting tube and a collecting tube cover. When the preservation liquid is mixed with saliva, it can be preserved for a long time at room temperature, and the DNA/RNA of saliva sample is not damaged. This product is green and easy to carry.

2.What is the purpose of using a DNA saliva collecting device?It is used to collect and store saliva samples secreted by oral cavity at room temperature. Samples were extracted and used for clinical diagnosis in vitro.

3.What is the principle of a DNA saliva collecting device?This product collects saliva samples secreted by oral cavity, and evenly mixes the collected saliva with saliva preservation solution, thus ensuring the integrity of DNA in saliva samples and their long-term preservation at room temperature.

Before collecting samples for 30 min, rinse with water and fast after rinsing;

Step 4: After screwing on the cover of the collecting tube, shake it gently for 5 seconds, and it can be used for detection or storage at normal temperature. 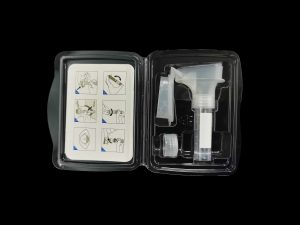