Why is nasal swab better than oral swab to detect Covid-19?

What is the difference between nasal cavity swab and oral swab?

According to Deputy Chief Physician Cai Yuexin, some areas of the pharynx include nasopharynx, oropharynx, and laryngopharyngeal. The mucous membranes of the three are continuous and belong to the area of ?the upper respiratory tract. Nasal swabs and oral swabs only take different sampling paths. The sampling is an oropharyngeal swab, and the nasal sampling is a nasal swab. However, because the oral swab can be operated by opening the mouth, it is relatively simple, so it is more commonly used clinically, but the risk of exposure of the sampler is higher.

1. It can stay in the pharynx for a longer period of time in order to obtain more sufficient samples. This is also the reason why the positive rate is higher than that of oral swabs reported in the literature.

2. The patient is well tolerated, and can basically take samples without anesthesia after proficient operation, but the surface anesthesia and contraction of the nasal mucosa can be performed at the beginning.

3. The exposure risk of the sampler is lower than that of the oral swab, because our sampler can stand behind the patient when sampling, and the patient is required to pull down the mask to expose only the nostrils, cover the oral cavity, and do not need to look directly at the patient’s oral cavity, and There is basically no pharyngeal reflex, and a few patients may have sneeze reflex after sampling. The patient can be covered by elbows or tissues, and because the sampler is not in front of the patient, the exposure risk is quite lower, so the psychological pressure of the sampler will not be so great. 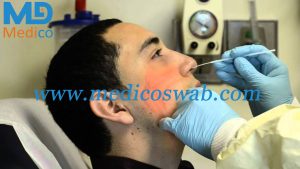