Are there any health risks to the sampling swabs used for nucleic acid testing?

When a new round of nucleic acid screening was being carried out in Shanghai, a rumor spread widely on social media to the effect that “the cotton swabs used for sampling have reagents on them and are poisonous”. Some netizens left a message on the “Shanghai Refutes Rumors Platform” saying that the elderly at home did not want to participate in nucleic acid screening after seeing the relevant rumors, and also persuaded young people to try their best not to undergo nucleic acid testing and antigen testing.

Is there a difference between the swabs used in nucleic acid testing and antigen testing and ordinary cotton swabs?

Will the above reagents threaten health?

The answer is: no threat to health! The Shanghai refutes rumors platform asked a number of test kit manufacturers for verification, and all received a clear answer that “sampling cotton swabs are different from those used in daily life, they do not contain reagents, nor are they toxic.”

Why use flocked swabs for nucleic acid testing and antigen testing?

A flocked swab is used because it is more suitable for sampling and testing. The flocking swab is made of nylon fiber flocking technology, and the front end is coated with nylon short fibers fixed in a vertical manner, so that there is no absorption hole in the entire collection area of ​​the swab. In this way, the collected sample is not dispersed and retained in the fiber, which facilitates faster and more efficient elution. Relevant data show that flocking swabs can elute more than 85% of the sample collection; traditional cotton swabs, especially those made of absorbent cotton, cannot completely collect and elute samples. 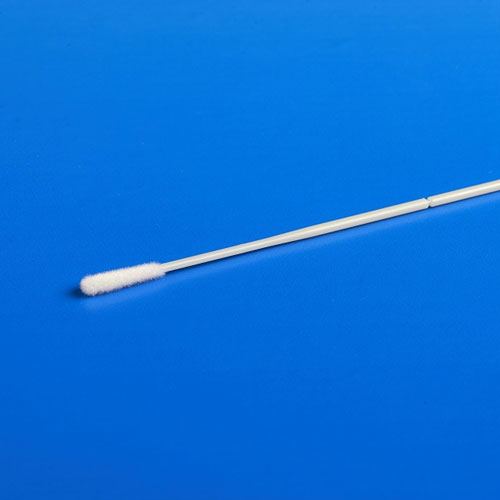 The online claim that “sampling cotton swabs are poisonous” is completely nonsense. Sampling swabs are produced for sampling, and do not contain any soaking reagents themselves, nor do they need to contain reagents; at the same time, sampling swabs are medical devices, and the basic requirements for qualified products are non-toxic and harmless.

In order to learn more about sampling swabs, we randomly selected antigen detection kits circulating in the market to see what sampling swabs they were paired with. Judging from the collected sampling swabs, all of them are small independent packages, and the Chinese product name is “disposable sampling swab” instead of “cotton swab”. There are medical device filing certificate information on the product packaging.

пенный тампон sampling swab manufacturers have stated that according to national regulations, single-use sampling swabs belong to a class of medical device products, not only production must be filed, but also strict production environment requirements and quality supervision standards, qualified products must be non-toxic harmless. At the same time, “disposable sampling swab” is a general product in the medical field, which can sample different parts and be used in different detection behaviors. It is not specially produced for nucleic acid detection or antigen detection, so the swab will not contain other reagents.